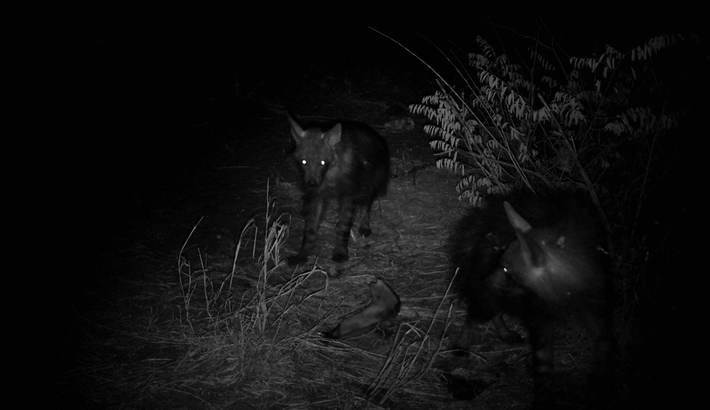 It has been over a month now since our excellent guides Thapelo and Oyapo, first spotted two beautiful and mysterious brown hyenas on the night time camera traps. Hugely excited, they set to work trying to locate these elusive animals, by heading out at first light to follow the spore and track their movements.

After several weeks of searching, Thapelo and Oyapo were just starting to think they may never find the brown hyena den, when they came across a bunch of tiny hyena tracks… Bingo.

The guides had found an active hyena den, complete with two young cubs. Suddenly, all those early mornings had been worth it.

Since then, Thapelo and Oyapo have located two more active dens in the area. We believe each den to be home to at least two cubs, some very young judging by the tiny paw prints.

The Lodge has been buzzing with the exciting news and each morning the guys come back with new hyena updates. Like the morning news headlines African bush style. Last week they returned with huge grins, telling how they had found several brown hyenas just finishing up on a steenbok kill.

The Hyena Cubs are Getting Braver

Slowly the hyena cubs are becoming less shy around the game viewer and have allowed several guests (and many of the staff) the privilege of encountering these rare animals in the wild.

We are looking forward to watching our beautiful resident hyena pups grow up and seeing their journey to adulthood – a path rarely captured by the human eye.

The Lodge has even given the game viewer a new paint job – going from beige to brown – to help it camouflage better in the hyenas’ eyes.

It’s not only the guides that have morning announcements however. When the staff check out the nighttime footage from the camera traps each morning it often reveals many exciting secrets that the darkness has concealed.

Recently, our cameras have seen huge amounts of action; caracals making dramatic lunges at passing birds, leopards slinking through the bush and drinking at waterholes, cheetah spotted on camera and later seen for the first time near the lodge and many oryx, kudu and aardvark.