The Mystery of the Thirsty Guests 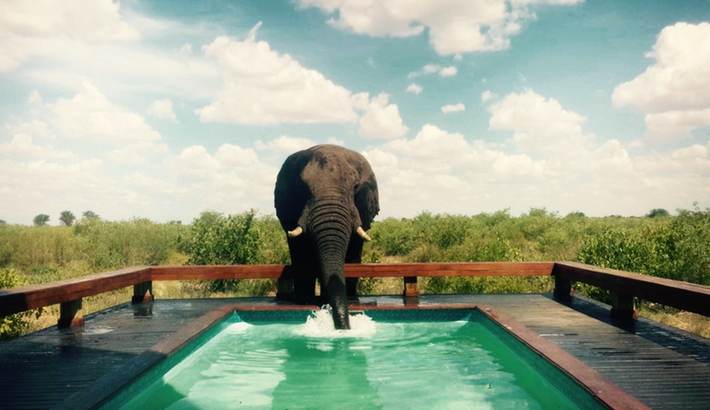 You’d expect crime rates to be fairly low out in the middle of the Kalahari, where the population density is pretty sparse… You certainly wouldn’t anticipate being robbed blind by a surly mob of muscles and heavy drinkers…

The month began with an intriguing mystery as to why our 25m infinity pool seemed to be “leaking?!”, “evaporating?!” so quickly. “Surely, even the Kalahari sun isn’t that strong…”

The puzzle was soon solved however when we noticed there was a new guy in town. He had big muscly legs, eyes too small for his face and a huge nose and ears. He kept himself to himself, sauntering through the scrub as if he hadn’t a care in the world. It didn’t take us long to work out that it was no coincidence the water in our swimming pools had started disappearing shortly after he’d entered the scene.

Our new guest was a lovely bull elephant who, it turns out, is particularly partial to swimming pool water. He was first spotted from the roof terrace of suite number 4 whilst wandering far out in the Kalahari scrub. A majestic sight on the horizon, we all crowded round in excitement to have a look, thinking this would be the best view we’d get. However, it soon became clear that the elephant was not simply planning to pass through; he was making himself right at home by drinking from what he considered the very convenient water troughs dotted around the area.

An even bigger surprise came when we realised that, unlike a lot of male bulls who travel solo, this guy had just been casing the joint for the rest of his crew. Within a few days he was joined by a further 5 elephants – who all turned out to be equally as thirsty.

The group popped in and continued to slurp their way around The Lodge for several days, rudely disrupting our swimming schedules…but hey, we reckon it’s probably worth missing the odd dip for a sight like this. 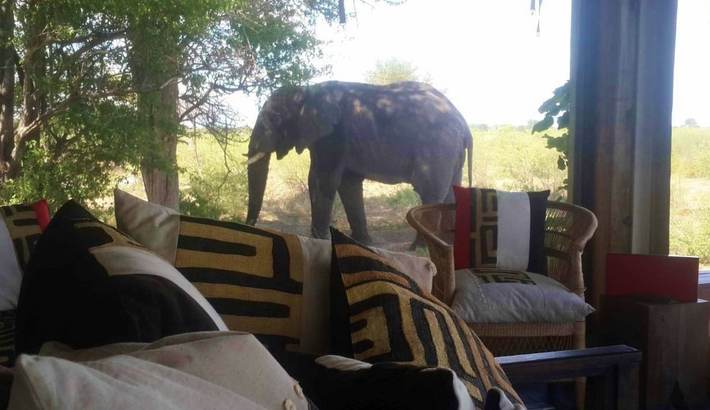